With all great excitement, we arrived Juphal. Ins spite of being tat this elevation of 2460m the feeling of temperature was not there but at least no much humidity that experienced in Nepalgunj, what a relief!

Setting off to Kageni the trail drops down through a large flat-mud roofed Dangi village . It was surprise to see still age old settlements with so many modern looking people around. The sanitation and hygiene still a far cry even being so close to the Juphal airport that is well connected to Nepalgunj. The surrounding was with the barren slopes, was told they can grow almost every crops, even rice. The Walnut, Olive and Junipers were main trees with other bushes and we were also lucky to see a pair of Paradise Flycatcher, probably breeding even here. At the valley we went though police checkpoint, located on the bank of Thuli Bheri, the main big river of the area and followed upstream on the dirt road, was surprised again see the trax Jeep plying from Juphal to Dunai and back. It was nice walking along the river with the pleasant wind, looking at the flowers and stopped for Dal bhat lunch, that almost took two hours before we set off again. It was nice rest though by the river and garden with large Walnut tree and apricot, that we also got to taste. We continue through the army checkpoint after crossing the river to follow the clean and beautiful river Sulighad on the other side. The hillside trail sees wild Pomegranate bushes. The very few birds seen along the riverside were Blue Whistling Thrush, Black Bulbul, Himalayan Bulbul, Plumbeous Water Redstart. The stays on the right side and we passed some ponies and Yarsa collectors returning home, a seasonal work and income of this area when some of villages and family all take this job going higher to collect the yarsa (Cordyceps) and sell it to the Chinese business people or brokers who sell them to outside. We arrived Kageni. Located very next to the river Sulighad and stayed first hotel with nice garden but not so clean toilet but may be luxury in this area. Next morning, we set off to our next destination Rechi, 3000m. The trail today is through the beautiful forest, on and off the river, could see and hear the birds such Blue Whistling Thrush and Large-billed Warbler and many other species. We pass Syangta hotel, only located near the small hydro power station and village Chepka, first Buddhist community with few hotels and camping grounds. Further we passed tented camps of cattle herder and tea shop. The trail continues to arrive Army checkpoint near the large suspension bridge over the Sulighad river, where the trail also forks off to Kagmara pass to Jumla. Shortly, we cross the river, on small wooden bridge and arrive Rechi village of few houses. We stayed in, one that is near the road. It was a long and very tiring day today and arrived just before the dark around 6pm, though due to summer day still not dark. One of the clients also was not well but did very well in spite and was great relief to be here.

From Rechi, following the river on its left bank and beautiful tree avenue,s we further crossed the river on traditional wooden bridge  and staying mostly on its right bank, the trail brings us to Taparazi village with few lodges and large Swiss made school and some govt office. We stopped at a small tea shop after crossing the river on large suspension bridge and started gradual climb, passing temporary settlements and tented camp and climb steeply looking at the scenic valley behind and on our right with the snow-clad two peaks towards the Bagala pass area in the east. After about couple of hours of walk steeply, we arrived to a small view tower, where we go the first view of the Suligad waterfall, one of the highest waterfall in the country. After enjoying the view, taking pictures and filling up with some snacks, we arrived at the top, after short climb, from where we go the first view of lake Phoksundo in the distance. It looked like some blue paint just below the barren hills in the valley. From this point, the trail drops down to the river and gradually made our ways to thois beautiful village of Ringmo, mostly very traditional, well blended in the area apart from some new coloured tinned roofed house below. Cross the village for few minute and arrive to our hotel located near the lake and camping area, what a wonderful area. The lake in its turquoise blue reflection contrasting with the surrounding hills, was very dramatic view. So glad to be here, in this piece of heaven in Nepal only. Checked in and had lunch and walked around to the lake and above the village, what a great day we had, so lucky with the weather too, though still at this elevation of 3600m, its still very warm weather and night temperature was very pleasant.

Next day, we spent an extra day with morning birding and walk to the Caravan trail to the view point. The lake was even more beautiful today with the snow-clad mountain peaks in the distance. Very dusty trail but very scenic and we made only to the first point on the north of the Ringmo village, from where we could see most part of the river and looked so large from this end. Though going around would have been the way to explore, that requires an overnight somewhere. We did enjoy the views some birding and glacier of Kanjiroba Himal. Tried hard to find out the mountain goats or any other larger wildlife but we could also see Himalayan Pica near the lake and White-winged Grosbeak and few other birds.

After spending great extra day in Ringmo village we retraced back to Juphal, only to find out that we had to wait for another extra night due to the airline’s unfriendly regulation, that was only told at the last minute. On the way back, the early start was great to cross the fall area and downhill as we managed to avoid the windy and dusty trail, with almost no people. It was also great that I managed to see the Large-leaf Warble, that I confirmed latter only. From Ringmo to Kageni, our night before Juphal, actually was very long trail but we all managed to finished the day little after 5pm with lunch at Rechi. One of the main reason was to be in Juphal early to get ready and to avoid the heat of the sun on the steep climb from Thuli Bheri river to Dangi and then to Juphal.

Next day, starting in time, we arrived to Dangi, where, we were offered the Dal bhat by Dhan Bahadur Dangi, who has been working with as a porter in spite of being a mule person, owner. He was a great porter and support and also I learned lot from him. After hearty meal, we arrived at Juphal, hoping to see the world cup in hotel TV and fly next day.

So no fly and just easy day with few hours walks around and explored the hillside of Juphal, meeting people and watched World Cup football and next day we managed to take this exciting flight back to Nepalgunj and back to Kathmandu. 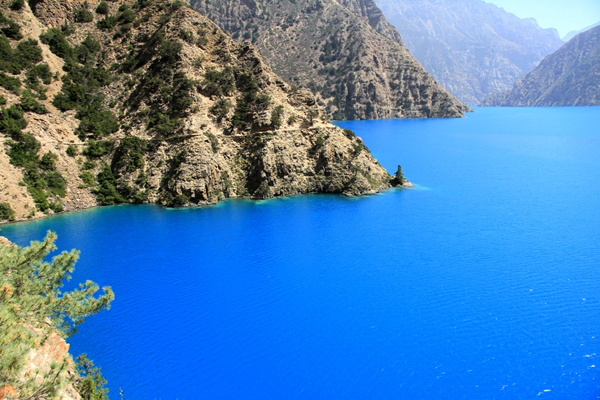